On August 12, 2022, People’s Park was fenced off, with remaining tents and shelter structures left within, creating a gloomy scene of dead space where once there was a community. 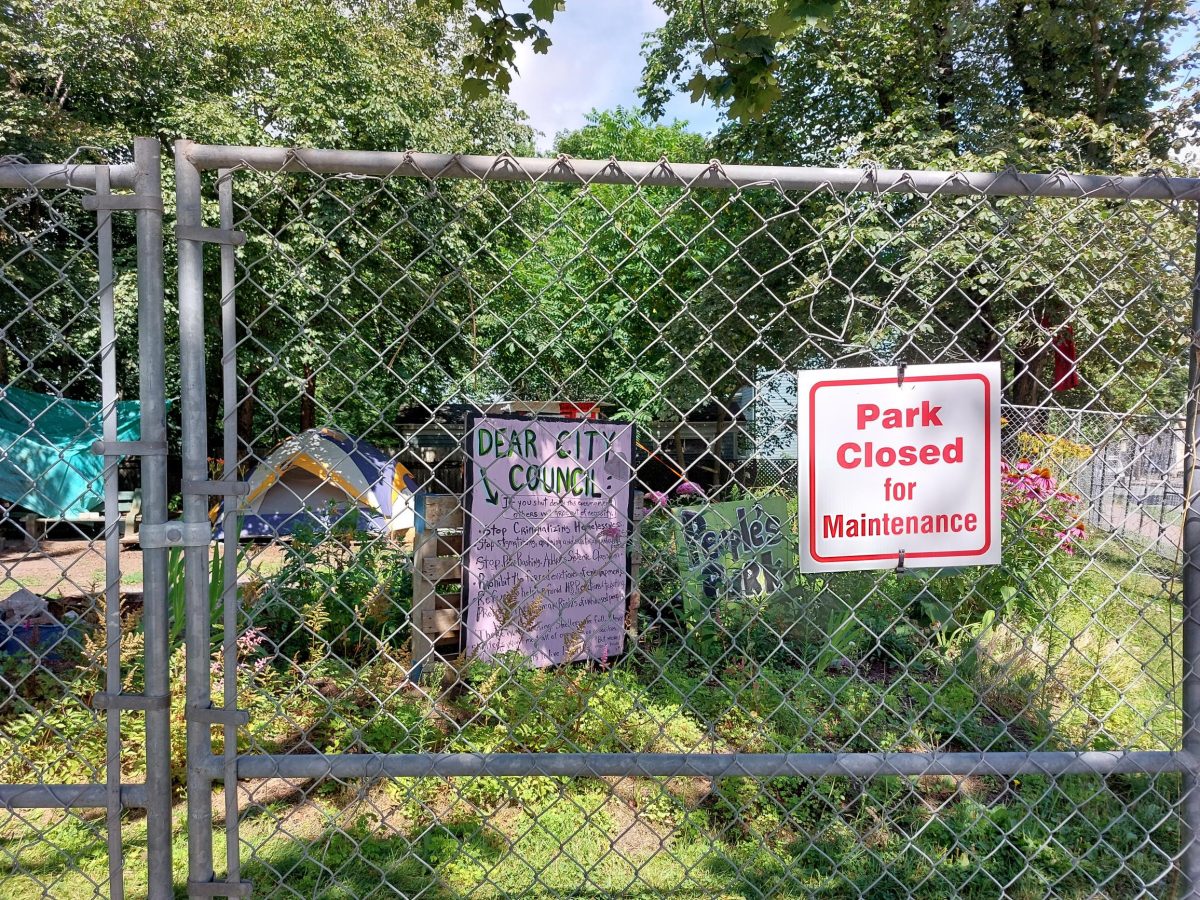 This enclosure, particularly during the time of the ongoing housing and homelessness crisis, should give reason to ponder the enclosures of commons lands from the 12th to 17th centuries in England – whereby the ruling class forcibly separated those who needed the lands for survival from the land – which led to enormous conflict.

It must be emphasized that People’s Park is just one example among many of a space in the HRM that those without homes have been using for survival. It is a small part of a much bigger picture of a homelessness crisis which is worsening rapidly. As of August 9, the Affordable Housing Association of Nova Scotia count listed 657 homeless people in the HRM, which is approximately 200 more than one year prior.

There are reports that prior to August 12, people living in People’s Park felt compelled or threatened to leave; that they were offered the carrot to leave peacefully, otherwise the stick of police force would be brought to bear upon them.

Was this a forced eviction, contrary to the right to housing and international legal standards to which Canada is beholden? If HRM and the police threatened park residents to leave, and the residents left in fear of possible violence, it was forced and a violation of the right to housing. The background to the so called “empty park” as it was on August 12, is everything to understanding how rights of those living in the park were impacted.

In mid July 2022, the residents of People’s Park, were informed that if the remaining residents did not leave, the police may be used as a means to remove them. This was reported in The Coast. HRM did not confirm or deny that there was a threat to use police force to remove people. In any case, at the August 2, 2022 HRM council meeting, dedicated to the question of People’s Park, Chief Kinsella did confirm that police force was on the table.* As reported in the Halifax Examiner:

The municipality is now at a point where they are considering exercising an option to call the HRP for assistance,” said Halifax Regional Police Chief Dan Kinsella. “This decision will change the approach from non-enforcement-led to enforcement-led.”

On August 12, in the very early hours of the morning, Halifax Regional Police (HRP) were on hand as HRM staff enclosed a reportedly empty People’s Park. HRP released a statement, stating:

“This morning, Meagher Park was physically secured by Halifax Regional Municipality staff for upcoming remediation work. Halifax Regional Police officers were on hand for support and assistance. Following deteriorating health and safety conditions at the park, a notice to vacate the park was issued on July 5, 2022 with a July 17 deadline for voluntary vacation of the park.”

As reported in Global News on August 12, the P.A.D.S Community Advocacy Network – who had been on site providing support through People’s Park’s existence – expressed grave concern over exactly how voluntarily people had left the site:

“We are concerned that some of the people who relocated from the park did so out of fear of police violence, given the police and contracted security surveillance activities in and around the park over the past several days,” it said.

“These intimidation tactics do not constitute a peaceful approach to closing down the park, nor are they part of the joint statement recommendations from service providers and advocacy groups released on August 5th.”

In an interview, P.A.D.S. volunteer Drew Moore said the closure of the park sets a “precedent for the many other homeless encampments that currently exist, and are likely soon to pop up.”

International Law and the protocol for homeless encampments

The International Covenant on Economic Social and Cultural Rights (ICESCR) affirms the right to housing.

Canada became party to the ICESCR in 1976. In 2019, the National Housing Strategy Act realized the right to housing in national legislation, stating in it, “the right to adequate housing is a fundamental human right affirmed in international law.” There is no doubt: the right to housing exists in Canada, and should be applicable wherever people are forced to live on municipal, provincial or federal park lands for housing of last resort.

Regarding the growing and alarming number of homeless encampments in Canada – perhaps better described as informal settlements – former UN Special Rapporteur on the Right to Adequate Housing and her lead researcher, Leilani Farha and Kaitlin Shwann respectively, authored the “National Protocol for Homeless Encampments in Canada” (Protocol). Forced evictions area violation of the right to housing and, overall a gross violation of human rights. The Protocol states (emphasis added):

45 Under international human rights law, forced evictions constitute a gross violation of human rights and are prohibited in all circumstances, including in the context of encampments.

46 Forced evictions are defined as “the permanent or temporary removal against their will of individuals, families and/or communities from the homes and/or land which they occupy, without the provision of, and access to, appropriate forms of legal or other protection … in conformity with the provisions of the International Covenants on Human Rights.”

47 Forced evictions are impermissible irrespective of the tenure status of those affected. This means that the forced eviction of encampments is prohibited if appropriate forms of protection are not provided – including all of the requirements described in this Protocol. It may also be considered a forced eviction when governments’ and those acting on their behalf harass, intimidate, or threaten encampment residents, causing residents to vacate the property.

It is clear that harassment and intimidation to pressure those living in People’s Park or any park in the HRM to leave, would constitute a forced eviction and a violation of the fundamental human rights of those living in the parks.

The dust will eventually settle on what actually happened at People’s Park prior to the park being empty of people on August 12, and whether people truly left willingly, and were provided with adequate alternatives.

*At the August 2 council meeting, plenty was said about health and safety issues at the park, and  concerns by some neighbours of the park about these issues, as a basis for clearing the park. However, before the HRM should even consider infringing fundamental rights of those living in encampments, there ought to be credible proof that those living in encampments were actually causing any health and safety issues sufficient to justify removal.

This may be a good place to introduce yourself and your site or include some credits.